How to use the Degrees to Radians Converter

When we measure the angle between two lines, that measurement is providing the amount of rotation necessary to make the slope of one line match that of the other. The word degree in its most general usage means "amount" but when measuring an angle, the word degree is a unit of rotation.

Degrees in a Circle

A full rotation (or a turn) would correspond to a complete circle, or exactly 360 degrees of rotation. If you wonder about the seemingly odd choice of using 360 degrees to represent a full rotation, you can probably blame the Babylonians. Some ancient number systems were based on units like 12 and 60. Examples of how this carried forward into modern life is the 12 months of the calendar and 24 hours in the day (12 hours of day, 12 hours of night). Another example is the choice of 360 as the units of measurement complete circle. 360 factors neatly by both 12 and 60, and you can inscribe six equalateral triangles (which have exactly 60 degrees at each angle) in a circle.

While degrees are familiar to most people, for many applications it is more convenient to work in a different unit of angular measurement called radians. To understand the value of a radian, it's useful to remember the formular for the circumference of a circle...

Circumference of a Circle

Expressing rotation in terms of radians simplifies a number of other trignometric calculations, but because radians are expressed in terms of pi they may feel less useful in practical applications (for example, setting the angle on a saw blade when you're cutting a peice of wood.) That's where this degrees to radians converter comes into play!

Radians in a Circle

This degrees to radians converter allows you to enter radians either as a decimal value or as a fraction of pi, and it will calculate the alternate radians representation as well as the value in degrees appropriately.

How to Convert Degrees to Radians

There are two simple approaches to converting degrees to radians, one deals with decimal radians and the other with radians expressed as a fraction of pi.

Because the number of degrees in a circle is a trascendental number and has an inifinite decimal expansion, there is not an exact conversion from degrees to decimal radians. However, a reasonable approximation is to use a decimal constant of sufficient precision for whatever calculation you are trying to perform...

Degrees to Radians as a Decimal

However, by expressing radians as a fraction of pi, you can calculate a precise fraction multiplied by pi. Recall that a full circle (360° of rotation) is exactly 2π radians, so 180° is π radians. Therefore, one degree is 1/180th of π radians...

Degrees to Radians as a Fraction of Pi

Any of these methods for converting degrees to radians are similar and based on the idea that degrees are π/180 radians.

How to Convert Radians to Degrees

Converting radians to degrees is similar, and we can use invert the constants used in degrees to radians conversion... 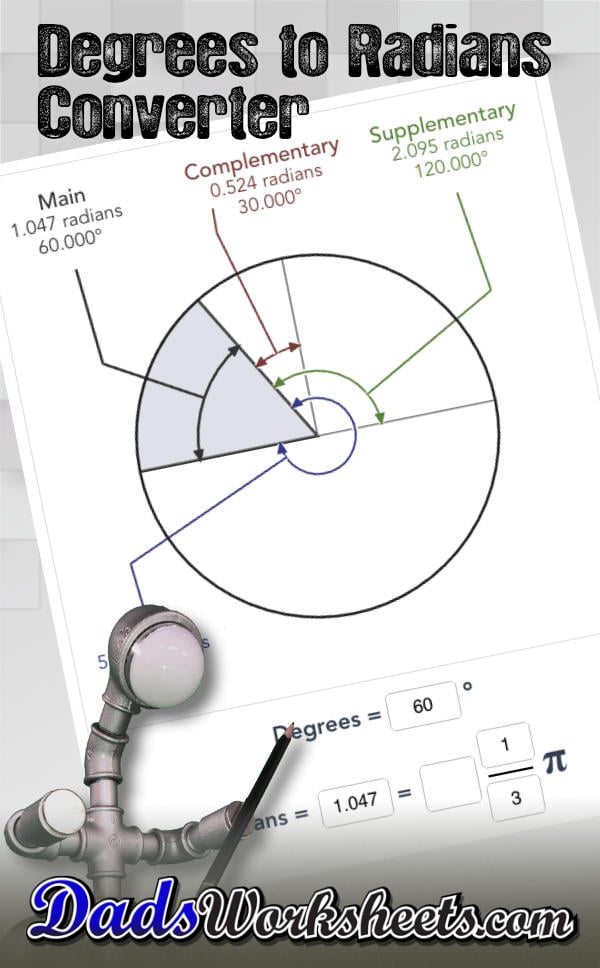