This page has base ten blocks worksheets that teach basic addition, subtraction, number sense and place value using visual representations of quantity as PDF printables with answer keys. These worksheets are appropriate for preschool, Kindergarten and first grade students learning basic math skills. These printable worksheets include ones, tens, hundreds and thousands blocks that are combined to illustrate fundamental arithmetic skills visually. Begin with the base ten blocks worksheets for practicing simple number sense, and as students skills progress, try the addition and subtraction worksheets where these operations are shown with number blocks to illustrate carrying and regrouping concepts.

Base ten blocks are a way for visual learners to develop an early idea of how numbers relate to quantity, and while they are often used as physical manipulatives in a classroom setting, the printable base ten block worksheets on this page are a ready substitute.

What are Base Ten Blocks?

Base 10 blocks are visual representations of numbers that help students learn the concepts of quantity and place value. The fundamental unit of a system of base ten blocks is the unit cube, which is a stand in for a quantity of one. A stack of ten units into a rod or column represents a value in the tens place. Similarly, ten rods in a square plane (called a "flat") represents the quantity one hundred, and a larger cube constructed from ten flats (or 10x10x10 unit cubes)) represents one thousand.

A student seeing these units, rods, flats and cubes together can easily visually the quantity of a number, and counting up the number of each base 10 manipulative translates directly into a number in place value form. The different base ten block shapes are often represented using different colors to emphasize their different place value roles in composing base 10 numbers.

Regrouping with Base Ten Blocks

When working with base ten blocks, regrouping is a skill that translates directly into simle addition and subtraction problems. For example, when adding up single unit cubes, a total of ten cubes can be regrouped into a single rod. This illustrates the concept of "carrying" in addition. Similarly, ten rods grouped together forms a flat, and ten flats forms a thousands cube.

A good exercise is to start with a quantity of thirteen unit cubes, regroup these into a single rod and three remaining unit cubes, and then understanding how this composing the decimal number 13. The base ten block regrouping worksheets above focus on exercises like this.

A similar activity involves subtracting and borrowing. For example, to subtract three units from twenty (two rods), you can imagine taking one rod and breaking it into it's ten unit cubes, and then removing the three units. That leaves the one whole rod (forming a the tens digit) and seven remaining unit cubes, or the decimal number 17.

Multiplication and Division with Base Ten Blocks

Multiplication and division concepts can also be visualized with base 10 blocks, although this is more easily performed with relatively small quantities. For multiplication, you can show how groups of similar sets of base ten blocks can be regrouped together to build the product. Similarly for division, understanding how a single large quantity can be split apart into uniform groups of base ten blocks illustrates the common sized grouping method of division. Base ten block worksheets that cover both of these techniques are in the respective sections above.

If you need a quick in class quiz, or just some more base ten block practice, the multiple choice worksheets on this page have several different examples of base ten block concepts with answer keys. You can use these as a quick assessment of student's skills, and then assign followup worksheets for practice for any trouble areas.

Base ten blocks are only one resource for teaching number sense and place value. Be sure to check out the place value chart, place value worksheets, printable number line and printable hundreds chart pages for other early learning math resources! 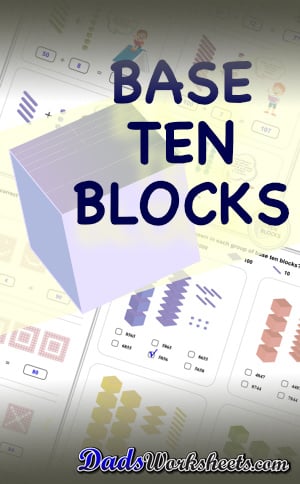 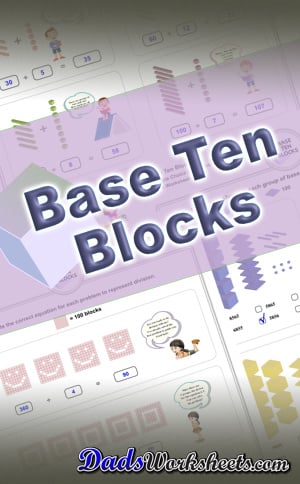 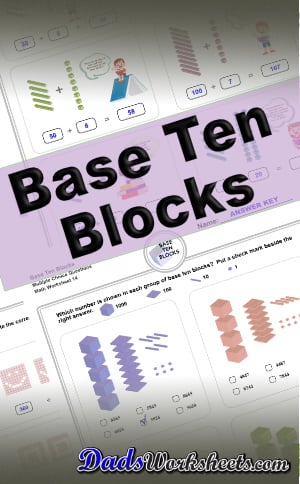