The slope worksheets on this page require students to identify the direction of a the slope of a line, and also to find the slope from two points.

Find the Slope of a Line 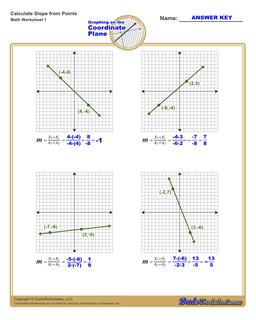 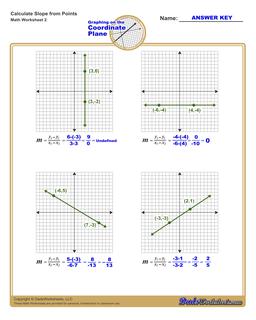 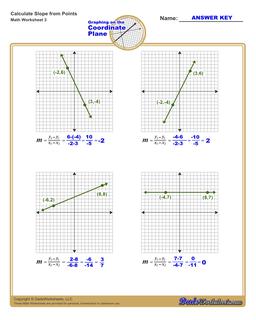 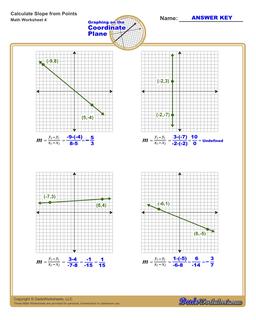 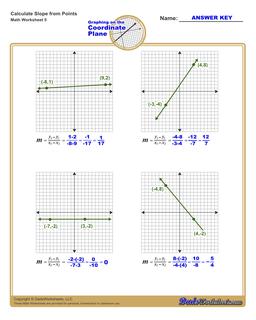 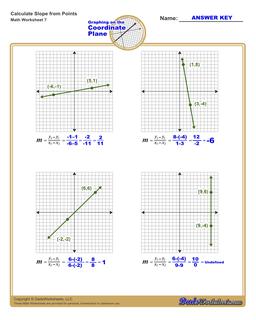 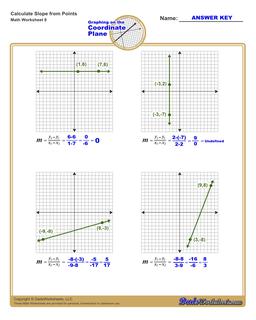 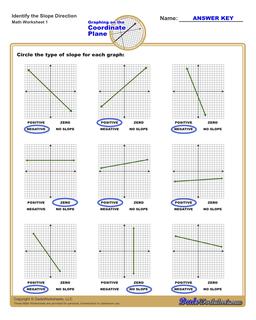 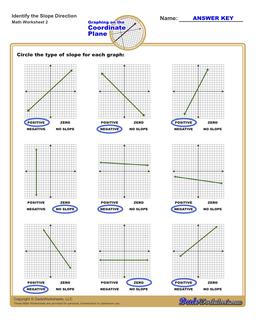 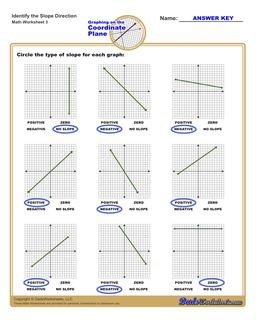 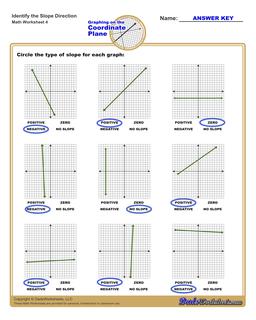 Slope is defined as the ratio of vertical (y-axis) change over a given amount of horizontal (x-axis) change, often remembered more simply as a fraction describing rise over run or the rate of change. Slope is usually shown as an fraction, often an improper fraction, but it can also be represented as a mixed fraction or decimal number in some situations.

Slope is sometimes referred to as the rate of change since it measures how much one coordinate increases or decreases in value as the other coordinate changes. For example, it is very common to graph how much a value changes over time, and in those cases the x-axis is used to denote time and the y axis is used to denote the value at each point in time. The slope measures how much change is happening over time. For a linear equation, the slope is a constant value… The y coordinate changes by the same amount as you move back and forth on the x-axis. Other higher order equations (equations with exponents) may have different slope values at different places on the curve, but for our discussion here we will focus on the slope of linear equations.

If a line is sloping down and to the right, it is falling as you look left-to-right across the x-axis. The rise in this case is negative (the line is “falling”), and such a line will have a negative slope.

What is Zero Slope?

When a line has zero slope, the entire mx term in the slope intercept equation becomes zero, leaving the equation for a horizontal line…

What is Undefined Slope?

When a line has undefined slope, the entire mx term in the slope intercept equation is also undefined and it is omitted from the equation. The result is the equation for a vertical line…

How to Find the Slope of a Line from Two Points

Given two points that define a line on a Cartesian coordinate plane, the slope of the line is calculated using the slope equation below:

By starting with two points (x1,y1) and (x2,y2), the substitute the values into the equation to calculate the “rise” on the top and the “run” on the bottom. It doesn’t matter which point is used as (x1,y1) or (x2,y2), but it is super important that you consistently use the coordinates from each point once you choose. For example, if you select one point such as (5, 6), be sure to use 6 as the minuend of the subtraction on the top of the equation, and 5 as the minuend of the subtraction on the bottom of the equation. When in doubt, use the slope calculator to check your work.

If you are graphing linear equations, the worksheets on this page provide great practice resources for middle school students. You can also use a blank coordinate plane to graph your own equations, or try working with the slope calculator to see how different points, slope and y-intercept values can be combined to make an equation in slope intercept form.